186 Introduction to the Text 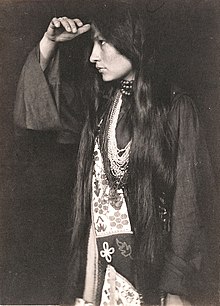 Zitkala-Sa wrote many great pieces of literature, most of them pertaining to her emotional attachment to the oppression of the Indian people in the 1880’s. Zitkala-Sa lived through the American government doing its best to tighten its grip on the Indian people by implementing a number of policies (laws) that made life on the reservations worse. For example, the Code of Indian Offenses of 1883 was mainly to attack the Native’s religion. As Christianity was the dominant religion at the time, this policy was meant to get rid of any customs of the Indian people that were seen to hinder the expansion of civilization. Zitkala-Sa uses her story “The School Days of an Indian Girl” to depict some of these things.

Zitkala-Sa uses a nonfiction standpoint, and starts the story off in 1884, with a young Zitkala-Sa sitting on an “iron horse”, heading east to Wabash, Indiana. Her destination? A Quaker missionary school called White’s Manual Institute for young Indian children like herself. Her original excitement was short-lived and cut down when she was met with overly strict rules, schedules, and even worse punishments. Everything she is taught to do – eat, speak, dress, write – is done to replace her tribal culture with the dominant white culture. Throughout her time at the school, Zitkala-Sa is treated as a foreign “uncivilized” person, which causes her to spend most of her time missing home – especially her mother – and she doesn’t make any real friends.

Zitkala-Sa even takes a stab at the Christian religion in her short story. Because she grew up in Sioux cultural in South Dakota, Zitkala-Sa learned to follow her tribal culture and the God of her people, who they call the “Great Spirit.” In her story, Zitkala-Sa pokes at the way that the whites taught their Christian faith. She depicts a scene where she was shown a picture of “the white man’s devil.”

With Zitkala-Sa writing this short story from the first-person point of view as well as using first-hand, personal experiences, the reader can empathize with her and the difficulties she faced at the missionary school. Because Zitkala-Sa uses this technique, the reader is forced to see white cultural the way that she did; scary and intrusive. Zitkala-Sa constantly mentions the misunderstandings between the whites and her and the other Indian children. This is caused by the different languages used by different peoples as well as the differences in the cultures. She was pushed into an unfamiliar world with many expectations which inevitably cursed her with many uncomfortable and unforgettable memories that she carries with her for the rest of her life.

Smith, Nadine. “An Analysis of the Autobiography ‘The School Days of an Indian Girl’ by Zitkala-Sa.” Seattlepi, Seattlepi, education.seattlepi.com/analysis-autobiography-the-school-days-indian-girl-zitkalasa-3671.html.

openamlitGU by Timothy Robbins is licensed under a Creative Commons Attribution 4.0 International License, except where otherwise noted.